Nine Ways to Improve Your Credit Score This Year 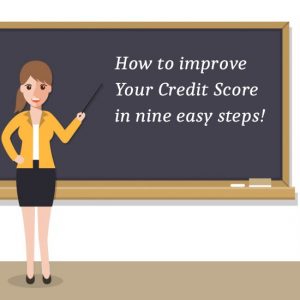 There are a lot of ways to improve your credit score, but here are the top ten best ways to do it this year.

Rule One: Having a war chest is better than having good credit.

This is almost a sacrilegious thing to say in today’s culture, but it’s true: Money in the bank is better than having access to credit. Consider this: why do many people get into credit card ruts in the first place? Some put too much on a credit card (because of a certain life event), and when the monthly bills start coming in, the money they spend on payments is the money they would normally have spent elsewhere. They make the payments, but in order to eat and get to work, they start charging even more. It gets to the point that some people have to even stop making payments altogether.

Regardless of the scenario, it takes most people an average of six months to financially recover; however, in that time, their credit scores have been damaged for 7-10 years if they were unable to not make payments.

Instead of shopping around for another credit card or mysterious way to boost their score, most people would benefit from living a frugal lifestyle until they can build up a war chest or sum of money that would protect them the next time life rains and pours. For many this involves not eating out for a year, going to the movies, or subscribing to cable TV. A tighten the belt and bootstraps situation, so to speak. The time you’re saving money won’t be the most enjoyable time of your life, but with financial security comes a good night’s sleep (something you can’t put a price tag on).

Rule two: All but one at none.

All but one at none means all of your credit card balances are repaid in full every month except one at the time they are reported to the credit bureaus. The one card that is not repaid in full should have a balance that is more than $2 but less than 8.9% of the available credit. Therefore, if you have a credit card with a $2,500 card balance, you can’t put more than $222.50 on it (*take your available credit and multiply by .089).

Pay whatever is the minimum monthly payment on the card but don’t pay it off. All of your other cards must have a $0 balance at the time they are reported to the three credit bureaus, while one card maintains a balance that is less that 8.9% of its available credit (but, again, more than $2).

Run an internet search to find out when your card’s balance is reported. Don’t assume it’s reported when your payment is due. This is rarely the case!

You get points if you don’t have any open credit cards but then open three. Yes, there is a penalty for new accounts, but it is less than the amount you gain as you go from 0 to 3. Some good cards for building credit are the Discover (chrome or secured) and Capital One (secured or platinum) cards. If your credit is low, get the secured cards right out the gate, and then after six months of on-time payments have gone by apply for an unsecured Capital One card.

Don’t let yourself get any store cards as they can actually hold your score back as the years go by, and definitely avoid the following predatory cards: Credit One, Indigo, Milestone, and Total.

If you have no credit history, or your credit score is low because of several dings on your record, the path to a good credit score doesn’t involve taking on debt. Credit History (part of which involves making regular, on-time payments on for example loans) is just one aspect of building a solid credit score.

Often times, people with low credit will get a store credit card and start buying a bunch of odds and ends to accumulate debt, thinking that both the card and the payments they’ll make will help their score. However, these cards have atrocious interest rates (many times as high as 33%), so if you max out a $3,000 card with a high interest rate, it will take you a long, long time to pay it off if you’re just making regular monthly payments.

Rule five: Get negative marks on your credit history removed one at a time.

Any bad marks on your credit history will be there for 7-10 years. Get them taken off one at a time, and always work on the easiest ones first. It’s tempting to just try and do it all over the phone, but if you want results, do it in writing, using CMRRR (or certified mail, return receipt requested). This improves the likelihood of someone actually taking the time to read through your letter. It also ensures that you’ll have everything in writing, so if there is ever any need to dispute anything, you’ll have legal evidence to back up your claim.

Living by a realistic budget is key to rebuilding your credit score. When you sit down and look at a lot people’s money decisions, many are spending almost $5,000 a year on things they don’t need. They ate out too much on lunch breaks, they bought $5.00 coffees three times a week, or they bought books when they could have just as easily checked them out at their local library. The list could go on and on, but you get it.

Unfortunately, this isn’t cliché credit advice. If your credit score is low, take a look at your spending habits and ask yourself what you could live without. Everyone’s got something they could cut out until their credit scores are back in the 700s.

Buy a new car with a high interest rate and you’ll have yet another thing siphoning off your cash every month. The next time something bad happens in your life, will you be able to keep up with its payments? Find a local mechanic who’s selling fixed up clunkers for $2,000 or less. Yes, these cars may look a little rough around the edges, but they’ll get you to work and won’t eat up your hard earned cash every month. Plus, there’s the added benefit of when they do need a little maintenance the guy you bought it off of will probably charge you next to nothing to get it back out on the street.

As soon as possible, sign up all of your credit cards for autopay. Set them up for the minimum amount due, and tie the payments to a checking account set aside for auto payments. Always keep a few hundred dollars in that bank account, so if you do forget to make a payment you’ll know the money is there. Some Buy now pay later invoices might be possible to autopay also. Too many people have dings on their credit reports because of missed payments they could have very easily made.

Rule nine: Never max out a credit card. Ever.

The credit bureaus consider any card with more than 88.9% of its available credit to be maxed out. If this happens to you, regardless of how good you’ve been about making on time payments, your credit score is going to lower. If you are unable to pay it off and have to live with the balance for the time being, try to distribute it across two or three cards instead. The bureaus like you to have less than 38.9% on a single card.

Until you’ve paid off everything, take a fine tooth comb through every transaction and ask yourself if it was a need or luxury purchase. Luxury purchases need to be put on hold until you have a handle on your credit score. Sometimes larger purchases are necessary (and they may, in fact, be the reason you have such a large balance on your card), but more often than not it’s the smaller, ‘feel-good’ buys that hurt us over time.

Time is the healer of all wounds, even financial ones. Start taking advantage of the above rules today and your score will improve with time. It won’t take a decade, but expect it to take at least a year until your score is back in the green.

Grace Chen has 10 years of experience in the financial field and have been delivering excellent business content through her articles.

Grace graduated from the Haas School of Business, University of California and is currently the chief editor of Communicate Better where she has written and edited thousands of articles published in various media.